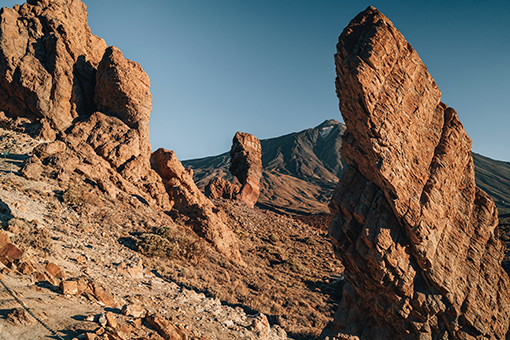 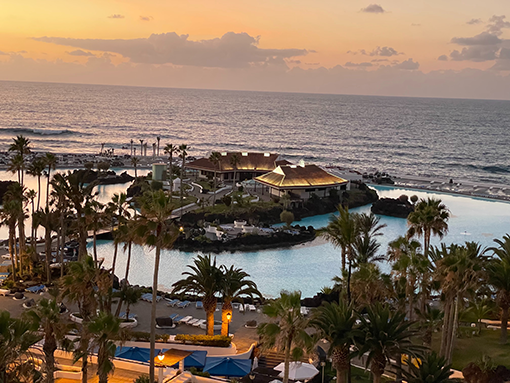 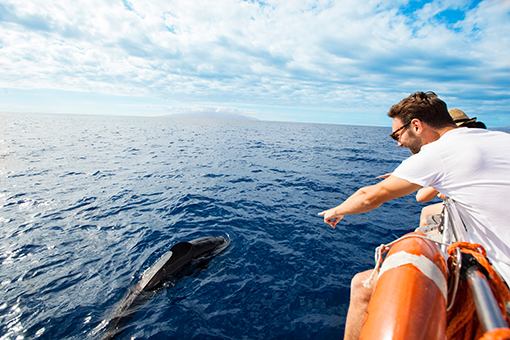 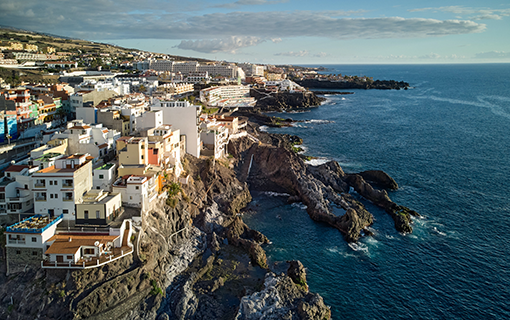 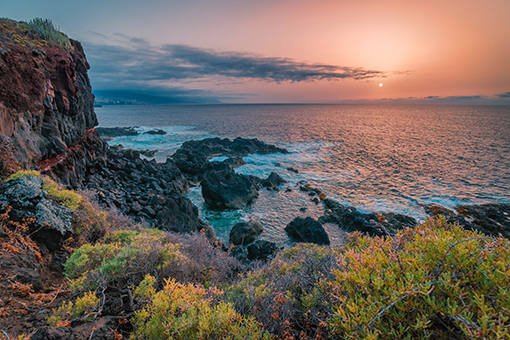 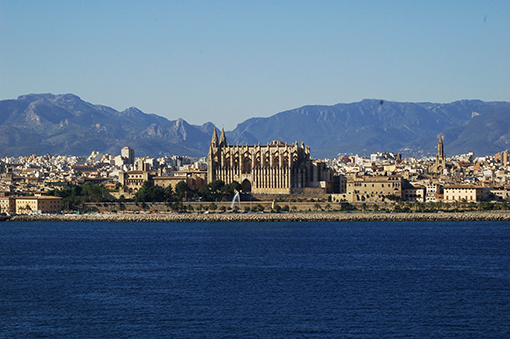 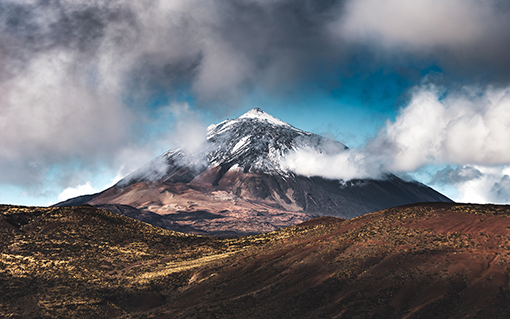 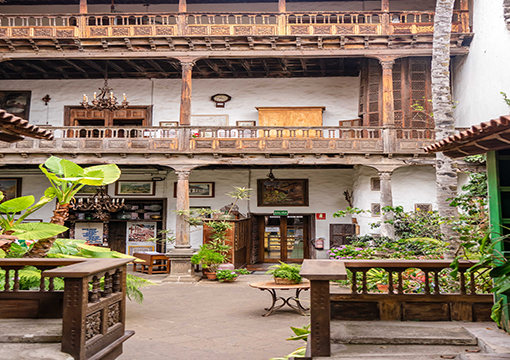 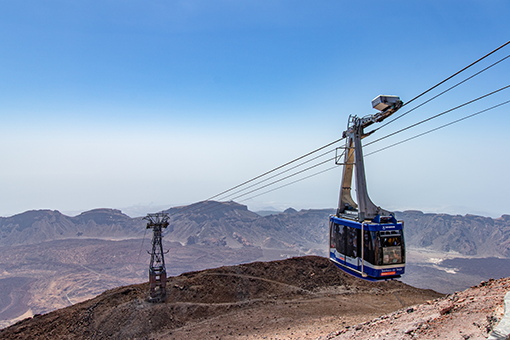 Transfer to Puerto de la Cruz, belonging to one of the 7 islands that make up the archipelago of volcanic origin. We are only 300 km away from the African continent, but the islands belong to Spain. Highlights the views of Teide, the highest peak in Spain.
We will enjoy activities and tranquility on the island and the hotel facilities.

After breakfast we get on the bus, ready for a full day on the move between Canarian villages. Tenerife's landscape is amazingly varied. In the north we find leafy valleys with great banana production, while the south is more like a semi-desert. In the highlands, pine forests and volcanic rock formations dominate.
The first stop will be at Los Gigantes beach. From the hotel we head west along the coast, until we reach the Giant's Cliff, which rises 500 meters vertically from the sea at the highest points. Like so much else in Tenerife, the cliffs are the result of volcanic activity on the island and are made of dark basalt. The indigenous people of the island, the Berber Gaunchers, called the phenomenon the 'Wall of Hell'.
Like something out of a fairy tale, we continue to the 1,000-year-old Dragon Blood Tree. The tree is the most famous attraction in Tenerife, it is 18 meters high, 20 meters wide, but maybe not exactly 1000 years old. We take a walk through the 'Dragon Park' and leave the cultural trail behind to head north to the historic town of La Orotava, where we have lunch at a local restaurant with drinks included. The small town is largely at the foot of the Teide volcano and we look at Canarian architectural history as we stroll through the town centre. The colorful facades of the houses in the historic district are some of the oldest settlements on the entire island, and each year in June they form the scene of the Christian festival of Corpus Christi, where the streets are covered with elaborate floral carpets.
Afterwards, we will cross the island to the coastal town of Candelaria on the east coast. The symbol of the city is the beautiful Basilica, which is the most important sanctuary dedicated to the Virgin Mary in the Canary Islands. The church we see is only 60 years old, but it was built on the remains of the original 17th-century church, which burned down in 1789. Pilgrims and tourists especially visit the basilica to see the Black Madonna behind the altar in the nave. We take a walk through the city of Candelaria and see the bronze statues of the indigenous people of the island, the gaunchers. The term encompasses the entire indigenous population of all the Canary Islands that inhabited the islands until the Spanish invasion in the 13th century. We listen to the history of the Berber people and get an idea of how the traditions of the Gaunchers still breathe in Tenerife. Back to the hotel.

Breakfast and departure to visit the city that has a population of more than 30,000 inhabitants and is one of the oldest vacation cities in Tenerife. The town center is well preserved and consists of fine little terraced houses with true Canarian charm floating in the streets. Flowers and green plants grow throughout the year in the city, which has several green areas and public parks. We surround the cozy fishing port, the historic square Plaza del Charco and the narrow streets with shops and outdoor cafes.
Particularly famous is the city for its unique coastal watershed, Lago Martiánez. The pool area was designed by the Canarian architect César Manrique, who has managed to combine the emerald colored pools with inviting terraces and local flora, while the Atlantic Ocean hits the dark cliffs right next to it. We return to the hotel for lunch. Free afternoon.

A day of nature awaits us in the Teide National Park. The geographical history of Tenerife dates back more than 10 million years, when three shield volcanoes became a solid land mass. Teide itself is 'only' 200,000 years old, making it a relatively young volcano geologically. Teide is still classified as active, but the most recent eruption dates back to 1909.
Today, Teide and the associated national park around the volcano are designated by UNESCO as a World Heritage Site. It is the largest national park in Tenerife and we get acquainted with the beautiful nature on this day trip. We visit the best viewpoints to and from Mount Teide, so we really get to grips with the beautiful, rugged terrain and see, among other things, the iconic Roque Cinchado rock formation, a Tenerife landmark in the middle of the park.
Stop for lunch and continuation to the coastal town of Garachico and the mountain town of Masca with just 100 inhabitants. Masca is an old settlement from the time of the Gaunchers, and is set in lush countryside and popular for hiking.

Free day to enjoy the island that has a cooler climate than the African continent, which is just as southern. Western Sahara, for example, is predominantly desert and significantly warmer. This is due to the cool Canary Current in the Atlantic Ocean, which passes through the islands. Even so, sea temperatures are very comfortable throughout the year. In the winter months, for example, the sea temperature is around 19 degrees, so it is possible to take a dip on a sunny day in January.
It is possible to take a full day excursion to see whales and dolphins. We head to the south coast and the port city of Puerto Colón, from where you will sail out into the Atlantic Ocean in search of humpback whales, porcupines and dolphins. The sailing trip takes place in a modern catamaran and on board there are local guides attentive to marine fauna. You sail along the Los Gigantes cliff and along the coastline in the Barranco de Masca gorge. You have lunch on board and get an exciting insight into the diet and annual migration of whales and dolphins.

Breakfast and we start the full day excursion to the neighboring island of La Gomera, the third smallest Canary Island. La Gomera is called “La Isla Redonda” We headed to the south coast of Tenerife, where we sailed by ferry to La Gomera, a boat trip of just over two hours. The navigation itself is a beautiful experience as we see the Teide volcano disappear in the background as we approach La Gomera. Millions of years ago there was a last volcanic eruption on La Gomera and, therefore, nature is even more exuberant than in Tenerife. Particularly spectacular is the Garajonay National Park, which forms a large part of the center of La Gomera.
The national park has been named a Natural World Heritage Site by UNESCO, and here we find one of the last primeval forests in the EU. We drive through the unique landscape to one of the most beautiful viewpoints on the island, where we will get a magnificent view across the gorges and green-covered mountains. We visit a small mountain village at the edge of the national park before having lunch in Agulo on the north coast.
During lunch, with the meal comes a fascinating experience as we receive an introduction to the indigenous whistle, the silbo. The gaunchers of La Gomera developed the language of the flute to be able to communicate over great distances in the impassable landscape. The whistles can be heard up to five kilometers away, and it is still "whistled" by some 20,000 people, in part because it was made compulsory in school in 1999.
After lunch and the fascinating sound performance, we head through the Hermigua Gorge to the capital, San Sebastian, where we also dock with the ferry this morning. It was here that Christopher Columbus made his last stopover for provisions before continuing across the Atlantic in 1492 and discovering the New World. We take a walk through the city and see, among other things, the historic Torre del Conde from the 15th century, beautifully situated overlooking the sea in the green park of the same name. We have some free time in town where authentic outdoor cafes are on offer before taking the ferry to Tenerife

last day that we will dedicate to enjoying the place, without forgetting the Lagos Martianez or visiting the famous Loro Parque zoo, where you can see

Breakfast and free time until the time of transfer to the airport
solarroute
We use cookies on our website to give you the most relevant experience by remembering your preferences and repeat visits. By clicking “Accept All”, you consent to the use of ALL the cookies. However, you may visit "Cookie Settings" to provide a controlled consent.
Cookie SettingsAccept All
Manage consent